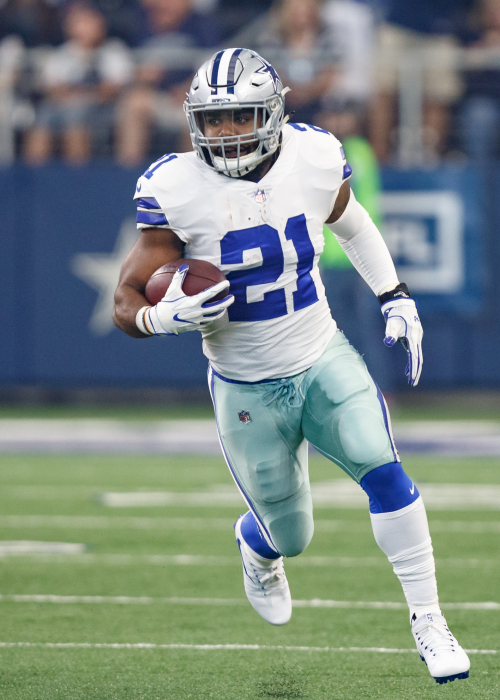 2019 Rush/Rec Stats
ATT
301
YDS
1357
TD
12
YDS
420
TD
2
2019 Rush/Rec Projections
ATT
YDS
TD
YDS
TD
Unlock Our Projections
2019 Fantasy Outlook
Elliott emerged as a truly complete back last season. In addition to earning his second rushing crown in three years and improving his YPC from 4.1 in 2017 to 4.7 in 2018, Elliott exploded as a receiver with more receptions than the previous two years combined. His 2,001 scrimmage yards ranked second only to Saquon Barkley, who had 2,028. Despite all that production, Elliott fell short in the touchdown department --- thanks to a career-low six rushing TDs, he needed three receiving scores to match in 15 games what he totaled for touchdowns in 10 games the previous year. The difference was at the goal line where he converted just two of 11 attempts inside the 5-yard line (18.2 percent after 33.3 and 50 percent the previous two years). The goal-line struggles may have been partially caused by playing without stud center Travis Frederick all season, but Elliott also ranked 33rd among qualified rushers with a broken tackle percentage of 7.6. Still, Elliott displayed elite vision and patience, and once he found space he remained extremely dangerous, leading the NFL in runs of 10-plus (41) and 15-plus yards (25). That skill also allows him to avoid some of the bigger hits one might expect from a high-volume running back, though his workload is a long-term concern --- 381 touches paced the league by a margin of 29 over Barkley. Tight end Jason Witten returns this year and could take a few of Elliott's targets, but with Frederick potentially back as well, the running game will remain front and center, and Elliott the engine of the team's offense. His holdout from training camp could throw a wrench in that plan, but the Cowboys won't be too worried unless his absence stretches beyond the preseason. Read Past Outlooks
read more
RANKS
#4.3
ADP
#

RBDallas Cowboys
Read More News
NFL Stats
Loading NFL Stats...
Fantasy/Red Zone Stats
See red zone opportunities inside the 20, 10 and 5-yard lines along with the percentage of time they converted the opportunity into a touchdown.
Loading Fantasy/Red Zone Stats...
Advanced NFL Stats
How do Ezekiel Elliott's 2019 advanced stats compare to other running backs?
This section compares his advanced stats with players at the same position. The bar represents the player's percentile rank. For example, if the bar is halfway across, then the player falls into the 50th percentile for that metric and it would be considered average. The longer the bar, the better it is for the player.
Broken Tackle %
10.6%
Positive Run %
88.7%
% Yds After Contact
57.9%
Avg Yds After Contact
2.6
Rushing TD %
4.0%
Touches Per Game
22.2
% Snaps w/Touch
37.7%
Air Yards Per Game
2.6
Air Yards Per Snap
0.04
% Team Air Yards
0.8%
% Team Targets
12.2%
Avg Depth of Target
0.6 Yds
Catch Rate
76.1%
Drop Rate
9.9%
Avg Yds After Catch
7.5
Loading Advanced NFL Stats...
2019
2018
2017
2016
2019 NFL Game Log